By Anirudh Sharma
The blockchain isn't just the backbone of cryptocurrency - it could change the world. Applications are endless. It is one of the most sought-after skills these days. Blockchain developers are in huge demand but there are only a few who can elegantly develop a blockchain application.

I will admit that I am a newbie to this field and all the related terminology. Recently I have decided to dive into this field and after learning a few nuances, I thought it would be a good idea to share my understanding with everyone. Hence, this blog.

This is the first blog of this series and without further ado let's learn together the awesome concepts of Blockchain technology.

What is a blockchain?

It is a decentralized platform which enables multiple domains, who do not trust each other to collaborate in a decision-making process.

Main keywords from the above definition are -

There are broadly three types of systems - centralized, distributed and decentralized. Below is the most widely used diagram that depicts these three. 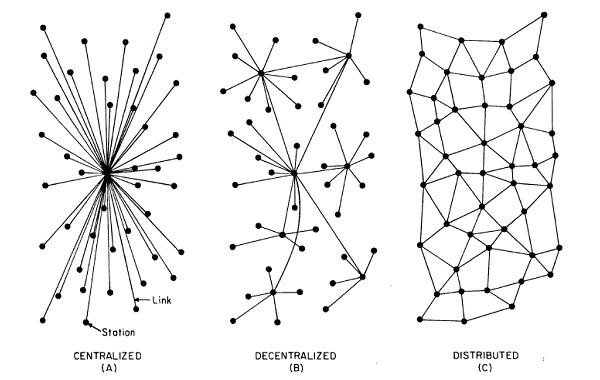 It is kind of multiple client-single server like architecture where the server computer is the one where all of the major processing is done.

This mechanism poses the following problems -

A distributed system is a model in which components located on networked computers communicate and coordinate their actions by passing messages.

Thus, it is a system where components might span geographical boundaries but are owned and controlled by a single entity (cloud computing). Trust in such a system is still centralized. For e.g. Google.

Here all the processing is not done by a single machine instead they allow to distribute work among various nodes and each of them can serve requests equally. For e.g. Cassandra data store.

In blockchain, everyone works on their local copy of a common document and it is the responsibility of the underlying process to ensure the consistency. Let us understand this with an example -
From above, when a new transaction or an edit to an existing transaction comes in to a blockchain, generally a majority of the nodes within a blockchain implementation must execute algorithms to evaluate and verify the history of the individual blockchain block that is proposed.

This distributed consensus model is what allows blockchain to run as a distributed ledger without the need for some central, unifying authority saying what transactions are valid and (perhaps more importantly) which ones are not.

Overall, the blockchain technology has the potential to revolutionize several industries from advertising to energy distribution. Its main power lies in its abilities of not requiring trust and being decentralized.

In future posts, we will dive deeper into the various concepts of this technology. Stay tuned! 🌝

Popular posts from this blog

By Anirudh Sharma
It's been a long time since my last post as I got stuck in some work. This is the last part of the introduction to blockchain series. In this post, we will touch upon a few more concepts of blockchain and their applications. At the end of the post, we will also look into the concept of Hyperledger Fabric in brief. Permission-less model In this model, anyone can join the network, participate in the process of block verification to create consensus and also create smart contracts. For e.g. Bitcoin and Ethereum network.  In a permissionless world, one does not have to prove their identity to the ledger.  As long as you are willing to commit processing power to be part of the network and extending the blockchain, you are allowed to play.  Any miner who is playing the game by the rule may be able to solve the hash puzzle and verify the block of transactions to win the mining reward (Higher the mining power, better the chances of winning the mining reward). It is good for fin
2 comments
Read more

By Anirudh Sharma
In the last part of this series , we discussed the basic concepts of blockchain technology. In this post, we are going to discuss the evolution of blockchain and it the latter part of the post, I will introduce the concept of bitcoin technology at a high level. Hashing and Hash Functions The concept of hashing is the backbone of the blockchain technology and it helps us to speed up the searching process. Hashing allows us to map any data to a fixed size. The entity which performs hashing is called a Hash Function. For e.g, H(x) = x%n ( % is the modulo operator - returns remainder when x is divided by n ) , as it is evident that x can be of any value but H(x) will always be in the range [0, n-1] . x is called Message H(x) is called Message Digest Cryptographic Hash Function It is a mathematical algorithm that maps data of arbitrary size to a bit string of a fixed size (a hash). It is a one-way function i.e. we can find H(x) if x and n are given but if H(x) and n
2 comments
Read more

By Anirudh Sharma
source: www.documentarytube.com In today's post, we will look into the architectural details of the blockchain technology. In doing so, we will touch upon the concepts of Smart Contracts and later on, about the internal details of a block that comprises the Bitcoin blockchain. Interesting project but no money ☹️ Let us say your friend Alice has an interesting project idea and she wants to start it as soon as possible but she has no (or little) funding to start it. She is very upset and then as a good friend you come to her rescue (A friend in need is a friend indeed 😊). You suggest her that she should crowdfund the project. She is now intrigued and inquires about it. What is crowdfunding and how it works? Put simply, crowdfunding is the process of getting a large crowd of people to pay a small amount of money to invest in an idea or product, with the promise that when the said idea comes to fruition, they will get first access to it. The idea can be anything, fro
1 comment
Read more